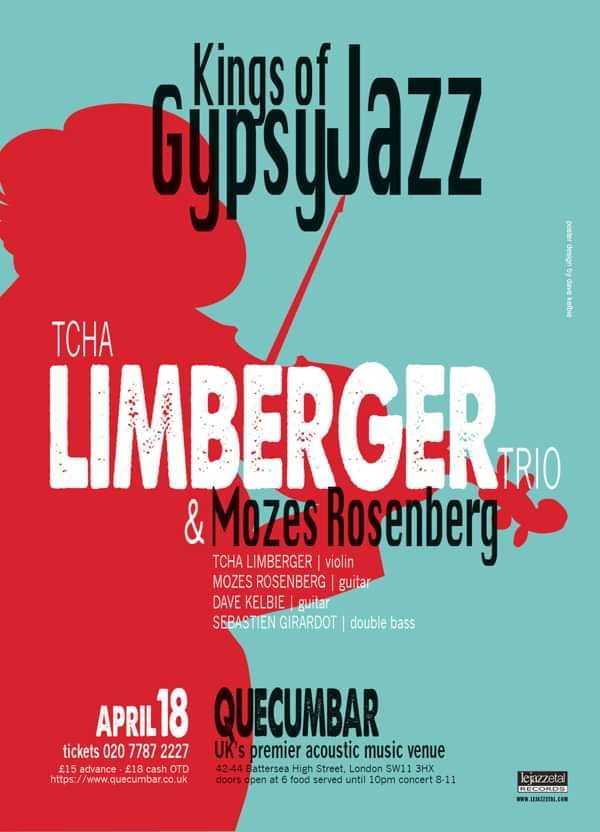 VIRTUOSIC AND MASTERFUL – TWO KINGS OF GYPSY JAZZ. Five-star international Gypsy jazz line up. As close to Gypsy jazz royalty as you’re likely to get!

Limberger, a spectacular multi-instrumentalist, known as much for enchanting performances with his Budapest Gypsy Orchestra and Kalotaszeg Trio as he is for being the world’s greatest Gypsy jazz violinist, is an unstoppable force in the world of world, folk and jazz music.

The polymath virtuoso Tcha Limberger is the king of gypsy music SUNDAY TIMES UK music as natural as breathing LONDONJAZZNEWS.COM UK Tcha Limberger seems to be made entirely out of music THE OBSERVER UK

“A project originating from a common passion of its members for traditional jazz styles and predominantly New Orleans and Swing. Groove is taken care of by two musicians whose resumes are longer than their arms: Dave Kelbie, a human metronome who combines the softness of genuine swing with enriched chords (regularly invited by masters such as Angelo Debarre and Fapy Lafertin) and Sébastien Girardot, a solid double-bass magician, with both a strong and agile style, highly solicited by famed jazz lineups (Michel Pastre Quintet, La Section Rythmique…). In a word: an Imperial rhythm section, no doubt one of the best of its kind and tied together in the Lejazzetal hall of fame project: Django à la Créole. Mozes Rosenberg, the newcomer to this project is no other than Stochelo Rosenberg’s younger brother. At 35 he already has 20 years’ experience and he is one of Gypsy Swing guitar’s newest gems. A brilliant heir to the Dutch informal ‘Gypsy guitar academy’, Mozes has achieved the development of his own voice despite the obvious connection to Stochelo Rosenberg’s legacy. A master of every modern guitar player’s skills (arpeggio, chord, and single note playing), Mozes illustrates himself with long, floating and sharp choruses, sometimes acrobatic, always remarkably formed and musical. If he occasionally blows proper musical torpedoes, he also knows that poetry lies in gentleness.”